New Zealand claimed the second leg of the World Rugby Women’s Sevens Series after beating rivals Australia in another epic clash between the two sides in São Paulo.

A try from player of the tournament Portia Woodman sealed the 17-10 win for her side, after the scores were locked at 10-10 in the second half.

Speaking after the final whistle, winning coach Sean Horan said: “It was a real final – we knew it was going to be a game of chess. We were not lucky but we did get the rub of the green in the first half and that got the momentum going.

“There’s not much difference between these two sides, and I think that’s going to be the reality all the way through. It’s almost like the All Blacks and South Africa – Aussie have gone really well and it’s a credit to them.”

New Zealand captain Sarah Goss added: “To play Australia twice in a row and to get another win was amazing. The girls playing outstandingly and for Portia (Woodman) to get that try in the corner was epic.”

Portia Woodman was named player of the tournament after notching up a total of 13 tries over the weekend, making her the series top scorer with over 60 touchdowns since the inaugural season in 2012/2013.

Earlier, Canada and France fought it out for the third place spot, with the maple-leaf side easily beating their oppenents 19-0. 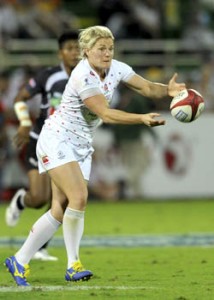 The plate final was contested between England and USA in Arena Barueri with the English ladies winning 14-5. The Bowl Final was claimed by Fiji, who won out a physical battle with Spain, 17-12.

World Rugby Chairman Bernard Lapasset said: “This weekend in Brazil we witnessed yet another great display of what the women’s series is all about – intensity, energy, high skill levels and passionate performances.”

“We can see the step-up at each round and this was typified with another thrilling final between New Zealand and Australia.”

The next leg of the women’s series travels to Atlanta, USA with all the action kicking off at Kennesaw State University on 14 and 15 March.

Standings after round two of the World Series with four rounds to go: