England Netball and Liverpool are delighted to have been awarded the rights to host the 2019 Netball World Cup following an announcement from the International Netball Federation earlier today.

The tournament will be staged at ACC Liverpool, a venue which has warmly welcomed England at international level on several occasions, the most famous of which saw the host nation lift their first ever major silverware following a World Netball Series victory in 2011.

CEO of England Netball Joanna Adams, commented “We’re absolutely thrilled to have been awarded the right to stage the World Cup, the biggest competition in netball. With participation increasing in the sport, this will provide a welcome incentive to build upon our momentum and increase the visibility of netball in our country.”

“This is a massive tribute to the wonderful army of volunteers who have helped us to grow the game in our country. Without their support we would never have been in a position to bid for, let alone win, the rights to host a Netball World Cup.  Having worked with Liverpool to host major global tournaments previously, we have a proven track record of being able to stage such a prestigious event and we look forward to welcoming the netball world to the North-West. On behalf of England Netball, I would like to thank all parties who worked with us on securing this bid.”

This will be only the third time that England has hosted the competition in its 56-year history. Previous locations include Birmingham in 1995 and the very first staging of the tournament in Eastbourne, 1963. 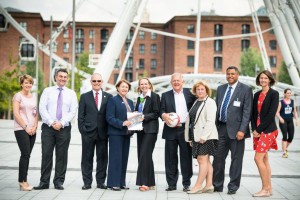 INF President, the Hon. Molly Rhone, OJ, CD, said: “On behalf of the Board of the International Netball Federation, I am delighted to announce that England Netball has been awarded the rights to host the 2019 Netball World Cup.  England put in a strong bid and we are confident that they will deliver an outstanding event in an excellent venue in the city of Liverpool. It is an exciting time for netball right now, which is growing at an unprecedented rate throughout the world.  We look forward to seeing this growth continue to soar and to working with the Organising Committee in bringing the INF’s most important event to England in 2019.”

Minister for Sport Helen Grant said:  “I’m delighted that the 2019 Netball World Cup will be held in Liverpool. Not only is it a major coup for the city, but for the country as a whole. I have no doubt that by hosting this major event on home soil we will raise the profile of this great sport even further and boost women’s sport generally.”

The 2019 Netball World Cup forms part of UK Sport’s Gold Event Series, which is investing around £40million of National Lottery funding to bring up to 100 world-class events to Great Britain to help build a strong legacy from London 2012 and the Glasgow 2014 Commonwealth Games

Liz Nicholl, Chief Executive of UK Sport and a former Chief Executive of England Netball, added: “UK Sport is delighted England Netball’s outstanding bid for the 2019 World Cup has been successful.  Netball is thriving with unprecedented growth in participation, support from sponsors and exposure in the media.  Add to this the Government’s strong commitment to promoting women’s sport, and I really do believe that Liverpool offers the perfect platform to help the International Netball Federation develop and grow this fantastic sport, not just in England but globally. “

“Through the Gold Event Series the UK is building an international reputation for staging world class major sporting events with its compelling mix of state-of-the-art facilities, great infrastructure and technical know-how as well as its army of experienced volunteers.  I am convinced we can help deliver a remarkable tournament in Liverpool in 2019 that will promote the growth of netball and once again demonstrate the considerable value we place on women’s sport in the UK.”

Located at the heart of the England’s North West, Liverpool is a city with vision, ambition, confidence and momentum. The region’s passion for sport is world famous and it will provide an enthusiastic and supportive audience during the competition.

Mayor of Liverpool Joe Anderson, said: “I am thrilled that Liverpool has been chosen to stage the Netball World Cup in 2019. It is a huge honour and vote of confidence, and demonstrates our track record in delivering major quality events.  Sport is hugely important in Liverpool and we have committed to a 10 year partnership with England Netball to build participation and grow the audience up to and beyond the event through a series of top internationals.  Our aim is to inspire people to participate in the sport and develop the next generation of netballers.  The stunning ACC Liverpool will be the perfect stage for the event and we are looking forward to welcoming a global audience of competing nations and putting on a show the sport can be truly proud of.”