The eagerly awaited England team announcement has finally been made and we now know who will meet Wales in their opening Six Nations encounter on Sunday, kick off 2.30pm at Swansea RFC.  The departure of long standing and hugely successful head coach Gary Street so soon before the beginning  of the 6 Nations, together with the Sevens Tournament in Brazil meaning that most of the professional players are unavailable for this first fixture is hardly ideal.

Acting Head Coach Nicola Ponsford has named a squad which includes eight world cup winners and three new caps in the starting line-up.  On the bench, four players could also be set to make their first starts for England. 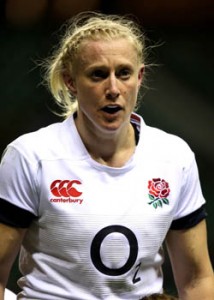 Darlington Mowden Park Sharks’ Tamara Taylor will captain the side with Wasps scrum-half La Toya Mason named as vice-captain. Taylor will marshal an experienced pack which includes just one debutant in Richmond flanker Hannah Field, while Mason is joined by World Cup winner Ceri Large at fly half. In the back line, Bristol duo Abbie Brown and Sydney Gregson will make their international debuts.

Ponsford said: “This season is the start of a new world cup cycle for us so the Six Nations is an opportunity for us to bring on a number of new players. We have got some really exciting young players coming through who will learn a lot from this experience. Hannah Field, Abbie Brown and Sydney Gregson have all played international sevens so they already have some international experience under their belts.

“This talent will be supported by a huge amount of experience across the rest of the squad, with eight world cup winners in the starting line-up. The pack is particularly strong, led by Tamara Taylor as captain, with players like Rochelle Clark who knows better than anyone the intensity of Six Nations rugby, in particular playing away against Wales.”

England head into this year’s Six Nations looking for their first championship win since 2012, with Ireland and France most recently taking the spoils. England finished last year’s campaign second best after an opening championship defeat to France in Grenoble.

Ponsford added: “I certainly think this year’s Six Nations will be the most open yet. All the squads are going through a rebuilding stage after last year’s world cup but we are confident that we have a squad who can register a solid performance to kick start our campaign. We have had a really positive four-day camp together last week and we are all just eager to get started now.”