A 14-woman England Sevens squad has been named to travel to Brazil for the second round of the Sevens World Series in Sao Paulo, February 7-8. The squad will be whittled down to 12 players ahead of the tournament after a week of warm-weather training.

Richmond’s Abigail Chamberlain has once again been named as captain and she leads a team that will be looking to improve on their Plate win in Dubai in December.  England will be boosted by the return of World Cup winning captain Katy Mclean who could make her first start for England since lifting the World Cup in August. 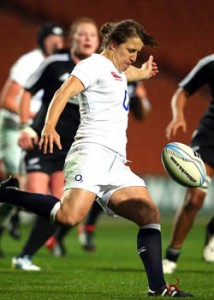 If selected, Mclean will also be competing in her first international sevens tournament since the 2013 Rugby World Cup Sevens.

Also, back in the mix for their sevens debuts this season are fellow World Cup winners Marlie Packer and Natasha Brennan. Sarah McKenna has also been called up to the travelling squad.

England Head Coach Simon Middleton, who has made four changes to the squad, said: “The majority of this squad were in Dubai but it is important to have some squad rotation and it is great to welcome Katy, Natasha, Sarah and Marlie into the fold.

“Katy is obviously a world class player so it is brilliant to have her experience while I will be looking to Natasha to bring us some of the x-factor we were missing in Dubai on the wing. Marlie and Sarah are, meanwhile, very experienced players.”

England will play South Africa, Canada and Russia in the pool stages at the Arena Barueri in Sao Paulo before hoping to better a Plate finish on day two.

Middleton added: “We have made a lot of progress since competing in Dubai. That was a really tough competition. I have to say we did a lot of things right, like winning our pool and beating Canada convincingly, but the one game we got wrong was the quarter-final and that was pretty significant. Since then, we have being doing a lot of work on ‘Game Four’ and we are hoping that will make the difference this time around.

“The pool stages will be tough again and South Africa is a side that we haven’t played since I have been here coaching. They don’t seem to get a lot of ball but they are very organised in defence and that is a big strength for them. We certainly know what to expect from Canada and Russia and we know we can’t rest on our laurels. We learnt some hard lessons in Dubai and we don’t want to see a repeat of them.”