Top of the League against Bottom, the T-Birds scored 14 trys and 78 points against a hapless Bristol Second XV without getting out of second gear and it could and should have been many, many more.

A young athletic Bristol had no answer to the power, pace and nous of a T-Bird team with one eye firmly on the approaching playoffs and the possibility of Premiership Rugby.

Completely dominating the scrum the T-Birds had so much possession that at times they didn‛t seem to know what to do with it: 6 first half trys and moves that left the crowd gasping and roaring in delight were interspersed with dropped balls and basic errors that would have shamed an U12 side.

In what was almost a contested training session a crowd of at least 250 were thoroughly entertained as Ts went through their entire repertoire of skills. 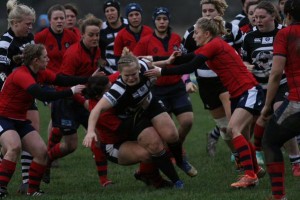 Massive hard carries from the forwards, pushover trys, driving mauls, jinking runs from the three quarters and pace on the outside from the back 3.

The second half started the same with Dannie Harris‛ pace ripping Bristol apart in only 2 minutes.  As Ts became lackadaisical at the ruck and started to concede penalties, Bristol, who never stopped fighting, grabbed their opportunity with a quick tap to run half the length of the pitch and grab a consolation score.

Unfortunately this woke the sleeping giant and Ts scored another 7 second half trys as despite some injuries and white line fever, they lifted their game to a completely different level.

So now 30 points clear at the top of Championship One South with a game away at Trojans still to go, the T-Birds are guaranteed a place in the first playoff against the winners of Championship One North (who are still to be confirmed), on 22nd February somewhere in the Coventry area.

Supporters coaches will be running from Thurrock Rugby Club.