Bowdon Hightown and East Grinstead booked their places in the final of the Women’s Hockey 5s Championship at the SSE Arena at Wembley in two weeks, with thrilling semi final victories on Saturday.

First to secure a spot in the final was Bowdon Hightown when they beat Canterbury 5-4 after battling back from an early deficit.  Sally Walton (pictured above) had given them the lead after nine minutes, but Canterbury hit back through Susie Townsend and Dirkie Chamberlain on 10 and 16 minutes.

Bowdon scored either side of half time through Tina Cullen and Kayleigh Humphries to take a 3-2 lead, but Canterbury’s Sarah Kerly equalised two minutes later.

Walton’s second goal edged Bowdon ahead on 27 minutes and Cullen also bagged a second with ten minutes remaining. Canterbury pulled one back through Jen Wilson on 34 minutes, but Bowdon held firm to take the win.

East Grinstead followed Bowdon Hightown into the Finals at Wembley after edging to a nail-biting 1-0 win over Slough.  Slough had more possession, more circle entries and more shots, but East Grinstead held firm and clinched their place in the last two thanks to Sophie Bray’s goal four minutes from the end. 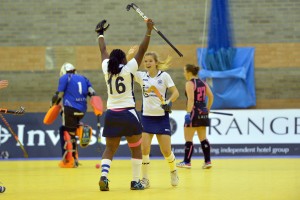 East Grinstead had lost 2-4 to Slough in the group stages, but they managed to shut out their rivals, and book a place in the final against Bowdon at the SSE Arena in Wembley on Sunday, 25 January 2015.

After their victory, Bowdon Hightown’s Tina Cullen said: “Semi finals are always tough as there’s so much to gain but also so much to lose. I’m really pleased with the team and we’re made up to make the final.  Amy Tennant was superb. She saved at least three certain goals and kept us in it. She was brilliant in the league phase and tonight was her best performance this season. We’re really pleased to get to the final and hope we can give a good account of ourselves this year.”

And East Grinstead captain JoJo Davis (pictured right congratulating Sophie Bray) said: “Pleased is an understatement. We’re ecstatic to get to Wembley.  We’ve been a bit up and down in the competition but we’ve beaten the likes of Canterbury and Reading which shows how far we’ve come.  Games like that are hard. You never know where the decisive goal is coming from. One moment can make or break the game. We focused and were determined and hung in there to get the job done.”