Toni Duggan is the winner of the fans England Women’s Player of the Year award after an exceptional year for Mark Sampson’s side.  A key player for the England youth teams in recent years, Toni made her senior team debut in the European Championship qualifier against Croatia in September 2012.

A pacy forward with a keen eye for goal, she has a wholly impressive international strike rate, with 20 goals in 38 youth team games.  And she really made a name for herself in the senior set-up by scoring a 93rd minute equaliser against Russia at Euro 2013, a goal that kept England’s hopes alive of reaching the quarter finals.

Toni was a key member of Mo Marley’s U19 squad that lifted the UEFA European Women’s U19 Championship in Belarus in 2009, scoring in the Final against Sweden.

The 23-year-old has scored six goals in ten games, including a hat-trick as England team beat Montenegro 9-0 in a World Cup Qualifier.

Her overall record of 14 goals in 24 internationals is an impressive return and she will be looking forward to performing at the World Cup in Canada later this year. 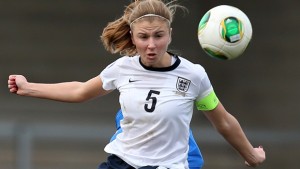 Winner of the England Women’s Young Player of the Year award is Leah Williamson.  Leah joined the Arsenal Ladies Centre of Excellence in 2006 at just nine-years-of age and has progressed throughout the age groups with real promise over each year group.  She was part of the under-17s’ league and cup double-winning squad in 2013 and last year made the step up to the senior squad to be a part of the team that won the FA women’s Cup in May.

Leah captained England at both under-15 and under-17 level and most recently been played for England Under-19s.  In the last 12 months she has played 14 times for the Three Lions across three different age groups and scored twice.

At just 17 Leah is considered to be an extremely talented young player with great vision and awareness. She is strong in the tackle and good in the air.   It clearly won’t be long before she breaks into the senior side.