This weekend the crème de la crème of the domestic women’s teams will make their way to Kettering for the 2015 Hockey 5s semi-finals. With holders Reading narrowly missing the cut this season there will be a new name on the trophy when all is said and done. Let’s take a look at the qualifiers.

The first clash is a repeat of the 2014 semi-final as Bowdon Hightown and Canterbury renew hostilities for a place at finals day at The SSE Arena, Wembley.

Bowdon qualified top after a stellar first weekend of four wins from four. They picked up the points needed to secure their semi-final place with time to spare on the second weekend.  They also proved to be the league’s great entertainers, netting the most goals with 40 strikes coming from eight games.  Sally Walton helped herself to 18 goals, making her the competition’s top scorer whilst Tina Cullen showed her class with ten goals of her own. Bowdon have been here before and after their finals day disappointment last season they will be keen to go all the way and recapture the title they won back in 2010-11. 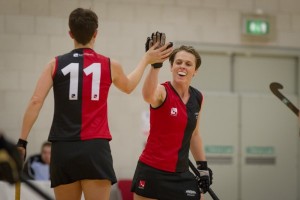 Their opponents will be Kent side, Canterbury.  The Polo Farm outfit secured the final place in the top four by virtue of goal difference.  Canterbury came out on top when the two sides met in this season’s qualifiers with a narrow 5-4 victory courtesy of double strikes from Eliza Brett and Susie Rowe, but they will also remember this time last year when their finals dreams were shattered by Bowdon who won the semi-final on shootout.

Canterbury will be relying on the goalscoring abilities of South African International Dirkie Chamberlain and Sarah Kerly who each scored seven times in the qualifiers, although in truth, they are a solid team unit who will relish the chance to join their men’s team at the showpiece in London.

The other semi-final sees East Grinstead take on Slough.

East Grinstead is a club that will forever be linked with the indoor game because of the exploits of their men’s side, but this is actually the first time the ladies have qualified for this stage.  Having consolidated their position in the top flight in their first season, their second season has been a great success and seen them qualify for the final four by sweeping aside Sutton Coldfield in a winner-takes-all clash in the final match of the league phase.

England and Great Britain star Sophie Bray produced a series of eye catching displays in qualifying and scored 11 times but was ably assisted by the talents of seven-goal Pip Rabey. In goal they have the formidable Kirsty Mackay meaning this is a unit with quality all over the pitch. They, like Canterbury, will be focused on ensuring the finals at The SSE Arena, Wembley feature both their men’s and women’s sides.

Slough will be keen to go one better than their efforts from last season when they crashed out at the semi-final stage.  Alex Danson’s goal seconds from the final whistle broke Slough hearts and sent Reading through instead.  With Great Britain goalkeeper Maddie Hinch between the posts and an incredible team work ethic, Slough boast the meanest defence in the competition, conceding just 19 times across the eight games.  With the ever-impressive Alex Scott a constant danger up front (16 goals in qualifying) Slough will hope their strength in all areas can get them back in the hunt to win the title they last scooped in 2007-2008.

Follow this link to buy tickets  to the semi-finals which take place this weekend at The Arena Sports Centre in Kettering. Doors open at 5pm.