England provided some festive cheer to a capacity crowd at the University Arena in Worcester this afternoon as they secured a 65-44 victory to complete a 2-0 Series win.

Following a comfortable success at the Copper Box on Wednesday, much of the starting seven was retained, the exception being WD where Stacey Francis took the bib.

The visiting Queens thought they had opened scoring from centre-pass but strong defence from the home side saw held ball called on the Malawi attack. Rachel Dunn was on hand to convert the following turnover and England started where they had left off from the previous fixture. However, Malawi certainly weren’t in the mood to roll over and accept defeat as they responded in fine style. Direct attacking play was producing errors from a usually tight English defence. The gap remained at two for much of the opening quarter.

The frustration that ensued manifested in a telling off for Eboni Beckford-Chambers as the opening quarter came to a close. It was still advantage England though as they took a 14-10 lead. A pair of changes were made for the second quarter as Ama Agbeze was moved into GD and Pamela Cookey took over at GA. England started the quarter in tremendous style, upping the pace of the ball through the mid-court with Jo Harten on hand to increase the lead in effortless style. Her combination work with Tamsin Greenway was looking impressive. 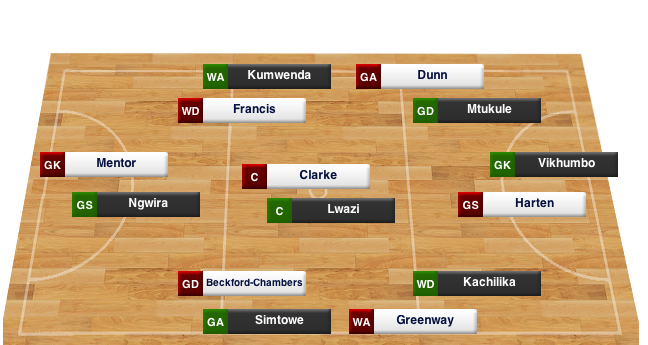 Malawi Vs England Starting line up

Once more Malawi refused to lie down and showcased their own awe inspiring athleticism and agility with some fabulous movement in the final third. The one way traffic was momentarily stemmed and The Queens kept the gap down to 30-21 at the half-time whistle.


Sara Bayman and Kadeen Corbin were introduced for the third quarter at WD and GA respectively. Beckford-Chambers was brought back on as well, this time at GK. A good start to the second half had the small but very noisy travelling support in fine voice. England were quick to react and had the remainder of the sell-out crowd roaring with delight as they extended the lead further.
A rare Bayman error was immediately corrected as she stole in to take a wonderful intercept and have the hosts charging forward again. Jade Clarke was also showing her class in the mid-court with some fabulous footwork allowing her to release Harten under the post to score. The momentum was with the ladies in red and heading into the final fifteen minutes the advantage had moved out to 50-32.

Two more changes were made for the final quarter with Cookey and Francis re-taking their places on court. The latter was straight back in her stride as the defender urged her side forward, oozing with passion in both her play and communications with her defensive unit. It set the standard which England responded to. Pressure across the court saw the home side win ball back on several occasions which allowed Harten and Cookey to extend the gap.

Although the result was now beyond them, Malawi continued to push and in the final five minutes they gained the upper hand with some wonderfully versatile passing and patience allowing them to get on the front foot.
The final word though, was to belong to England and Harten. The super shooter nailed another attempt which secured her naming as Player of the Series.

Three wins from three games played in the December International Series is a pleasing way for England to end 2014 but more challenges lie ahead. The World Cup in Sydney is on the horizon for Summer 2015 but first up in January, the team travel to Jamaica and will be hoping to start the year as they mean to go on.