England Netball is paying special thanks to their partners and supporters who teamed up yesterday to make a spectacular success of a star-studded charity match to promote positive women’s health and to help raise vital funds for Cancer Research UK. Two all-female celebrity teams, which included Sadie Frost, DJ Gemma Cairney, Neon Jungle and Made in Chelsea’s Georgia Toffolo battled it out on court. The match was hosted by the fabulous Laura Whitmore on Wednesday 17th December 2014 at the Olympic Village, Copper Box Arena and took place right before the International Netball Series England Vs Malawi.

With a 6,000 strong audience the atmosphere was electric and the match was certainly fast-paced and 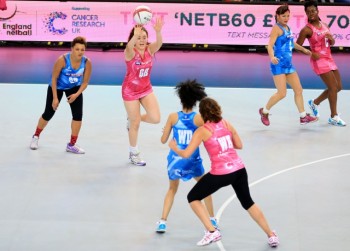 exhilarating. Host Laura Whitmore had the crowd raring to go when the celebrities entered onto the court to thunderous applause. Split into the teams of pink and blue celebrity players, each team was headed up by a netball star professional: Tallisa Haynes for the pink team and Tracey Neville for the blue team, along with help from assistant celebrity coach Made In Chelsea’s Fran Newman-Young. Players such as designer Sadie Frost and her sister personal trainer Holly Davidson as well as Radio 1 DJ Gemma Cairney played particularly well.

The match was competitive throughout with the pink team putting up a good fight with some strong defensive moves by comedian Vikki Stone and Big Reunion’s Michelle Barber and at half time the score was 5-3 to the blue team. But, it was great shooting from Liberty X singer Keli Young and Radio 1Xtra’s Yasmin Evans teamed with producer Collette Cooper controlling the play down the court, followed by fantastic movement from Made In Chelsea’s Georgia Toffolo that gave the blue team their triumphant win. The final score was 14 – 10 to the blue team.

At half time, Laura Whitmore spoke with one of the match organisers, sports bra specialist Freya Active’s Charlotte Ranford, who spoke about the importance of wearing a sports bra during exercise and the health benefits of wearing the correctly fitted size. Following this, Laura Whitmore also chatted to Hazel Phillips, a cancer survivor and keen fan of netball to talk about her battle against the disease. 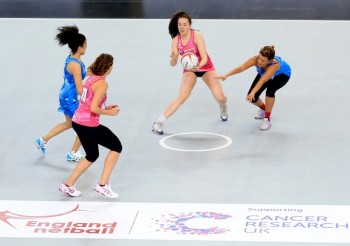 Funds from each of the match tickets sold, as well as funds raised on the day, went towards Cancer Research UK’s lifesaving work, helping to spread awareness of the disease and sharing findings that more than four in 10 cancers could be prevented by adopting a healthier lifestyle. This startling new statistic equates to around 49,000 cases of cancer in the UK each year that could be prevented by a combination of eating healthily, maintaining a healthy weight and being physically active.

Freya Active’s Head of Marketing, Ann-Marie Manley, said: “We’ve been working closely with Cancer Research UK, England Netball and Sky Sports for this incredibly significant cause. Promoting positive women’s health is so important and we’ll continue to work hard to promote why we need to maintain good breast health and get the correct support when exercising. We’d like to thank all of the celebrities who played in the match helping us to deliver such a great event and would like to thank absolutely everyone that donated.”

Teresa Hicks, Senior Manager from Cancer Research UK said: “We’re so grateful for the support that we’ve received from everyone involved tonight. The celebrities have not only shown their grit and determination on the court, they’ve also united everyone here in the fight against the nation’s biggest killer. As a united force we will beat cancer sooner.”

England Netball’s Commercial and Marketing Director, Jo Adams, said: “We’re delighted by the success of the celebrity netball match, it has been a fantastic event and we hope that the brilliant celebrities who took part will inspire women and girls to get active and involved in netball. We’d like to thank our fabulous partners Freya Active, Sky Sports and Cancer Research UK for their on-going support with both this campaign and the sport overall.”

Fans and spectators at the match were urged to use the hashtag #CelebNetballCRUK to create a buzz on social media for positive women’s health.

For more information about the match, visit www.englandnetball.co.uk

And Assistant Coach – Fran Newman-Young from Made In Chelsea