England produced a fantastic display in Liverpool this afternoon to stroll to a 70-25 win over Wales. Â The result was a fitting tribute to the hostsâ€™ Goalkeeper Geva Mentor, who was collecting her 100th cap after being named in the starting seven. 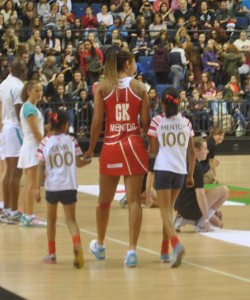 Led out by our newest centurion, England and Mentor were offered a standing ovation by the home crowd as they took to the court. Wales had brought along with them a particularly noisy section of support as they embraced their opportunity as last minute stand-ins for Malawi.

The visitors got the game underway but an immediate turnover saw Jo Harten sink the opening goal of the game. Wales were struggling to take the ball through to goal and a fast starting England team were punishing their errors with clinical accuracy. Â After five minutes, England were five clear. Not to be outdone by her celebrated defensive partner, Eboni Beckford-Chambers was providing wonderful support at GD and the combined pressure made sure that the ladies in red remained clear, 15-7 after the opening exchanges.

No substitutions were forthcoming at the start of the second quarter with the original seven keeping their positions. Â In contrast to the opening minutes of the match, Q2 was a slow burning affair. England were struggling to find their passing range with several balls sailing over their intended target. Â However, the home defence remained in control and the extending gap gave confidence to the attacking end. Quick passing around the circle edge allowed Jade Clarke to find Rachel Dunn who effortlessly slotted home.

The ever-blossoming partnership between the English defensive duo was in full show as Mentor and Beckford-Chambers applied pressure to force held ball on several occasions. At half-time the home side held a sizable 33-12 advantage.

The interval gave England a chance to alter their personnel on court. Tamsin Greenway made her return in an England dress at WA while Kadeen Corbin came into GA, Stacey Francis moved to WD and Ama Agbeze took the GD bib. Â Fantastic vision from Francis enabled her to fire a rocket feed into Harten who got the second half scoring underway. Agbeze and Bayman were working brilliantly and combined to pick off a bounce pass. The resultant converted turnover increased the lead to 44-13.

Determined to grab her moment in the spotlight, Francis draw applause from the crowd with an exceptional retrieval and pass as the ball was heading off court, a move she has made her own. Â The new combinations were linking instantly and Wales were unable to land any telling blows on a dominant England team. With fifteen minutes to go, the hosts led 56-17.

A final cheer for the crowd was to be had in the final quarter as co-captain Pamela Cookey made her return from injury and slotted back into her traditional GA position. Her first goal was greeted with the kind of applause usually reserved for a last minute winner.

The visitors were rocked and had little in way of response although they did fight valiantly until the final whistle. England kept up the pressure to improve upon an already eye-catching turnover rate and finish the game as comfortable winners.

Focus now switches to The Copper Box in London on Wednesday evening and the first clash against Malawi. A fabulous start to the December internationals has been secured but it will mean little if it isnâ€™t followed up in three daysâ€™ time.

The final word must go to the hero of the day, Mentor. The fact that so many in attendance stayed on after the final whistle to celebrate in her presentation says so much about how well respected the England defender is. Â It was an England display which reflected the best in both the team and in Mentor; it was a performance full of steely determination, precision and above all – class.

Yes, there are lots of fascinating possibilities available to Middleton. The trouble is, the crunch game comes first up. He must pick the side he can trust to produce the goods. In her latest pod Rachael Burford said the No 15 must be safe under the high ball, hence Sarah McKenna. Iâ€™ve seen both Dow and Attwood fail in this respect this season. Wing is a major source of strength with Thompson, Breach, Smith and Dow. Hard to leave out a player who scored 2 unforgettable tries in a world cup final against the worldâ€™s best, and played Woodman off the park in Rotorua. Sad thing is: wingers rarely figure on the bench. If they can offer a second option (full-back) they have a chance. That means Dow. A concern is No 7. I think the management prefer specialist flankers. Once Marlie Packer is counted out, that leaves only Vicky Fleetwood with the necessary pace and know-how on the open-side. Of the ones you mention, Cokayne fits the bill excellently. But sheâ€™s 1st-choice hooker. Has Kerr ever played back-row? Beckett was only filling in in the second row, surely. Yes, lots of talent waiting in the wings. Makes you wonder whoâ€™ll retain their contracts next year. Harriet Millar-Mills was invited in to join the test squad recently.

Huge apologies for the delay in getting back to you, Iâ€™ve just phoned Dartford FC and the match will be pay on the day, it would appear that you canâ€™t get advance tickets. Sorry it has taken so long.

We are a small group of sports fans who would like to see a little more parity in sports reporting. England womenâ€™s teams have had some wonderful successes in the last years and yet they donâ€™t get the recognition they deserve. We would like to begin to put that right by making them the focus of our website. You can get in touch with us from this page or via twitter