England held their nerve to run out 3-2 winners in a dramatic shootout seeing off China and clinching 5th place at the Champions Trophy. The sides had played out a 1-1 draw over the 60 minutes with Shona McCallin’s first international goal cancelled out by Qiuxia Cui’s 42nd minute equaliser.  With the game tied at full time, it meant England would face a shootout and with goalkeeper Maddie Hinch saving three times, Laura Unsworth was able to slot home in sudden death to hand Danny Kerry’s side the win.

In a cagey opening quarter, both sides looked comfortable in possession, but it was England who looked the more threatening in attack. They created the first goal scoring chance of the game when East Grinstead’s Sophie Bray burst into the circle, only to see her strike at goal saved by the right  foot of Dongxiao Li. In the 14th minute, Danny Kerry’s side deservedly took the lead through a fantastic team goal.  Bray, driving down the right side of the pitch squared the ball to Susannah Townsend in the circle.  Her powerful cross fell to Shona McCallin whose touch expertly deflected the ball into the roof of the net, scoring her first goal in an England shirt.

England started brightly in the second quarter, linking up nicely in the midfield and winning two penalty corners in quick succession, however, neither attempt threatened Li’s goal.  China then went on to create their best chance of the match so far, nearly bagging the equaliser just before the half time whistle.  Mengrong Wu’s crash ball into the circle was deflected by Yan Yan, who saw her effort loop up over a jumping Maddie Hinch, only to bounce off the top of the crossbar.

China continued to put pressure on the England defence after the break and were rewarded in the 42nd minute when captain Quixia Cui scored the equaliser.  England were down to 10 players after Townsend had received a green card and China were able to capitalise on the player advantage.  Yan Yan initially was unable to get her shot away but Cui pounced on the loose ball and slipped her shot under the onrushing Hinch.

With the score finely poised at 1 – 1 heading into the final quarter, both sides had chances to grab the winner.  Firstly, China won a penalty corner but the initial slap from the top of the circle was saved by Hinch and subsequently cleared by the England defence.  In the final two minutes Townsend fired a bouncing ball into the circle for Lily Owsley, who dived to make a connection, only to see the deflection flash just wide of the post.  Consequently, with the final score set at 1 – 1, it was left for a shootout to decide the fifth and sixth placing at the 2014 Champions Trophy.

With England up first, it was China who gained the early advantage when Georgie Twigg’s effort was saved by Li.   However, Hinch was on fine form, saving from Yang Peng and Meiyu Liang with Laura Unsworth scoring her attempt in between.  Li kept China in the tie when she saved from Susie Gilbert and they were soon back on level terms when captain Cui converted.  Bray was forced to re-take despite initially scoring, due to an umpire’s whistle and Li pulled out another fantastic save.  Jiaqi Li missed her chance to give China the lead and 21-year-old Joie Leigh kept her cool to convert England’s fifth.  Nothing could separate the two sides though as Qian Yu deftly lobbed Hinch, forcing the shootout in to sudden death.

With China now going first in the sudden death, Hinch put her body on the line, saving superbly from Peng to give England the advantage.
Holcombe’s Unsworth stepped up to seal victory and fifth place for England, firing a trademark slap from the top of the circle low into the bottom right hand corner. 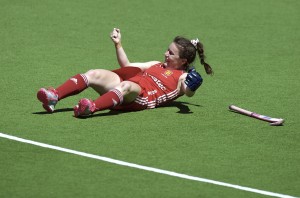 England Head Coach Danny Kerry: “This tournament has thrown everything at us. Losing Alex Danson after seven minutes in the first game, multiple trips to hospital with other players after every match, our last three matches in temperatures above 30 Celsius. Throughout all that this young group have stuck together. They have grown and have garnered enormous experience. We now have massive competition for places in the squad which will complement the excellent three months training we have already completed, and the consolidated six months we now have before our Olympic qualifier. I believe we will now go from strength to strength.”

England Goalkeeper Maddie Hinch:“We have a habit of getting in these situations and we’re becoming more and more comfortable as a team. I was looking forward to playing my part for the girls today. I was disappointed with the goal so it was good to be able to redeem myself in the shootout.

We’re a young group and we’ve put in some great performances in this tournament; results haven’t quite gone our way but we have a lot of positives to take home with us.”

Support England next summer at the EuroHockey Championships on the Queen Elizabeth Olympic Park in London. More information and tickets are available from www.eurohockey2015.co.uk