England made the best of their 5th-8th classification game at the Champions Trophy scoring three times to see off world number 10 side Japan. The result marked England’s first victory of the tournament with goals from Surbiton’s Hollie Webb and Sarah Haycroft and East Grinstead’s Sophie Bray. England will now face either China or Germany in the battle for fifth place tomorrow at 1700 [UK time].

England controlled possession in the opening quarter but few goal-scoring chances were created as they struggled to break down a determined Japanese defence.  However, in the 11th minute the deadlock was broken, as Hollie Webb’s powerful strike from England’s first penalty corner, deflected off goalkeeper Sakiyo Asano, into her own net to make it 1-0.

England continued to dominate in the second quarter and doubled their lead in the 28th minute. Surbiton’s Sarah Haycroft latched onto a ball in the midfield and weaved her way through the Japanese defence, eliminating three players. Her slipped pass found East Grinstead’s Sophie Bray, whose first touch finish was expertly deflected into the roof of the net. Japan won their first penalty corner in the final seconds of the first half but the shot from the top of the circle wasn’t a threat and the score remained 2-0 heading into the break. 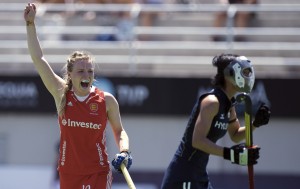 Japan started brightly in the third quarter and Holcombe’s Maddie Hinch, who has been nominated for FIH International Female Goalkeeper of the Year, was called into action for the first time. Hazuki Nagai’s reverse stick ball into the circle was deflected goal wards by Mie Nakashima but Hinch reacted quickly, palming the ball away with her left glove. Minutes later Hinch was beaten, as a free hit fired into the circle deflected off a Japanese stick and fell kindly to Akane Shibata on the back post who smashed the ball home on the volley.

With a 2-1 score line at the end of the third quarter the match was set for a tense final period, however Haycroft ruled out any chance of a Japanese fight back, when she scored her first England goal in the 49th minute to restore England’s two goal cushion. The Surbiton Captain ran into the Japanese circle unopposed and struck the ball into the top right hand corner of the goal, past a diving Asano, to seal the victory.

The result means that England will be playing against either Germany or China in the battle for a fifth place finish today at 17.00 (GMT) on the final day of the Women’s Champions Trophy.  All matches are being shown live on Sky Sports. For the schedule click here.

England Head Coach Danny Kerry: “I thought it was a disciplined performance in hot conditions and we did well to open up a defensive Japanese team. I’m delighted for Sarah Haycroft who showed her abilities on the ball in two of our goals.”

England Captain Sam Quek: “We’ve been focusing on the same things every game, it was just nice that we got the result today and that the goals came. I think the most important thing for us was that we kept our concentration, even though we conceded a goal in the third quarter. I was proud of the way the girls reacted; we kept our focus and built our attacking play which allowed us to score again and re-establish our two goal lead.”