England picked up their first point of the Champions Trophy campaign with a 1-1 draw against Germany in what turned out to be an enthralling encounter.  They trailed to Kristina Hillmann’s close range strike in the first half; however St Albans striker Ellie Watton hauled England level with her second goal of the tournament. In a frantic final quarter both sides had chances to win it, with England having a gilt-edged opportunity from the spot. Georgie Twigg’s penalty stroke was kept out by Kristina Reyonolds and it finished honours even.

England’s next game is against Argentina on Tuesday, live on Sky Sports from 18:30 GMT.

With both sides having suffered defeats in the opening games this match was shaping up to be a cagey affair. It was anything but, as England and Germany went toe-to-toe in an entertaining match.  Germany had the better of the opening quarter, pressing England high up the pitch and causing Maddie Hinch to be called into action on more than one occasion. Despite the Germans’ pressure, England had arguably the best chance as Watton put Sophie Bray in the clear only for her fierce effort to be superbly blocked by Reynolds.

Germany struck first in the second quarter. Kristina Hillmann broke free along the baseline on the left and cut the ball back to Katharina Otte. Her shot was half saved by Hinch but Hillmann was on hand to guide the ball home from close range.

In the third quarter Germany found themselves down to nine players as first Franzisca Hauke (34 minutes) and then Lisa Altenburg (36 minutes) were given yellow cards. Although Germany kept the ball well during that period England hit back in the 40th minute. Shona McCallin drove towards the circle well from the right and fired the ball in; Watton slapped a first time effort at goal which found a way through the goalkeeper’s legs via a deflection off Hannah Gablac’s stick. 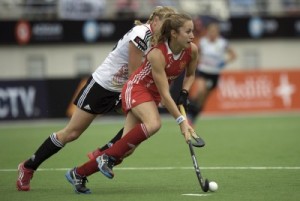 England visibly grew in confidence and pressed hard for a winner in the final quarter. The tireless Lily Owsley was a constant threat with her pace and direct running. She had a great chance when put in by Georgie Twigg but once again Reynolds foiled her with a splendid save. England won a penalty stroke via video referral with just three minutes to play but Twigg’s effort was well saved by Reynolds and the spoils were shared.

England Head Coach, Danny Kerry: “We had lots of good chances in the first half but then we had a player sin-binned and conceded a goal. We lost our way a bit until half time. After the break we were strong and came back into the game. I’m proud of how a young group played in the second half.”

England Captain Samantha Quek: “I think we started where we finished off yesterday, on the front foot. Our momentum was good, we just didn’t take our chances. I’m proud of the girls. We applied ourselves well and showed physically we are there. We had the legs and kept going to the end. We’re looking forward to the next game.”

England’s next game is against Argentina, Tuesday evening at 18:30 GMT. All the matches are being shown live on Sky Sports. For the schedule click here.

Enjoyed the excitement of an end-to-end encounter between two traditional sporting foes?  England and Germany will do it all again next summer as the EuroHockey Championships come to the Queen Elizabeth Olympic Park in London. More information and tickets are available from www.eurohockey2015.co.uk