On a terrific night for England Rugby,  Head Coach Gary Street was named the High Performance Coach of the Year at the UK Coaching Awards,  in Glasgow in the presence of Her Royal Highness the Princess Royal, while his team were winning the The Sunday Times and Sky Sports Team of the Year Award at a glittering ceremony in London. 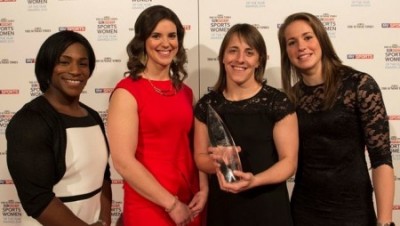 Street was then nominated for the overall UK Coach of the Year award and won that too having masterminded England’s World Cup win this summer in Paris.

Street said: “It is fantastic that the team continues to be recognised for our achievements this year. There have been some fabulous performances by women’s teams’ sport while personally I am honoured to be up against some esteemed coaching company.  Receiving awards like this makes what we do very special but what is also important is that women’s sport and women’s rugby in England continues to stay in the national spotlight.”

Nick Walshe and Anastacia Long were also finalists at the 2014 UK Coaching Awards. Walshe, the former England Under 20 coach who lead the age-group side to consecutive Junior World Championship titles this year, was nominated for the Performance Development Coach of the Year category.

Long was shortlisted for the Children’s Coach of the Year award for her efforts in the community game. She developed a rugby programme that not only saw Graveney School enter the NatWest Schools Cup for the first time this year, but make it through to the final of the Under 15 vase competition.  The school now has a team at every age-group and has 45 girls playing weekly.