FA Director Kelly Simmons believes the women’s game is on the verge of a boom in this country.

Simmons, who oversees the development of women’s football in this country, says next month’s groundbreaking match between England and Germany at Wembley Stadium, and the 2015 World Cup in Canada could be defining moments. And she feels these events could contribute to a surge in interest and a crossover into the sporting mainstream.

“We’ve got a great chance again,” Simmons said. “The England team have had a great qualification campaign. The World Cup next year is a great opportunity to put women’s football in the shop window and help raise the profile of the England players, so that people want to follow them when they go back to their clubs. It’s up to us to make sure we maximise that opportunity to keep building the fan base behind England and the Women’s Super League.” 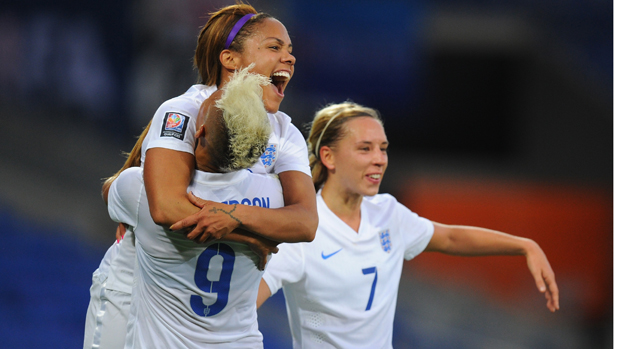 Source: Getty Images via The FA

Simmons looks back on Great Britain Women’s 2012 Olympic campaign, where they beat Brazil at Wembley before losing to Canada in the quarter-finals, with mixed feelings.

“While it was a disappointment, we definitely benefited from the Olympics,” she said. “The FA board have always said since the Olympics that they were really keen to bring women’s football back. We’ve come a long way from where it was three years ago, where it was like families and the pet dog. We felt our best chance to get a really good crowd at Wembley and make it a real spectacle would be to try to get world-class opposition. Germany are ranked No. 2, but many would think of them as the best team in the world.”

WSL crowds rose by 30 per cent to an average of 728 this year. A similar increase in 2015 would see attendances nudge the 1,000-spectator mark. And Simmons, who will address Kick It Out’s second Women’s Raise Your Game conference at Upton Park on Tuesday, said: “Every time it gets compared to men’s football it’s a challenge because that’s a 150-year-old, multi-billion-pound industry and it’s by far and away our national game. But if you compare women’s football to other female sports then I guess we’re doing quite well.”

A healthy Wembley crowd for the Germany match is expected.