England claimed a small slice of revenge over New Zealand this morning with a thrilling 42-38 victory in Rotorua. The ladies in red were able to hold off a ferocious Silver Ferns fight back to claim a famous away win and go ahead in the two match series.

The anticipation was high ahead of this encounter with both teams looking to bounce back from defeat in Australia. The last time the two sides met was at the semi-finals of the Commonwealth Games when England suffered last second heartbreak. History threatened to repeat itself as the Silver Ferns came from ten goals behind to move to within one goal in the closing minutes and place immense pressure on England shoulders. The visitors stood firm and were able to silence the home crowd with a late turnover to eventually see out the match by four goals.

England Head Coach Anna Mayes named a strong looking starting seven with Serena Guthrie winning her 50th cap after being named at WD. However, in the early stages it was her mid-court partner Sara Bayman who was impressing. A fantastic steal followed by a sublime feed had England tails up as they moved into a 5-3 lead. Jade Clarke was linking well with the shooting combination of Jo Harten and Rachel Dunn as England ended the quarter with a flourish to take a 14-9 lead. The excellent end to the previous quarter was also down to some outstanding defensive work from the increasingly reliable combination of Geva Mentor and Eboni Beckford-Chambers. 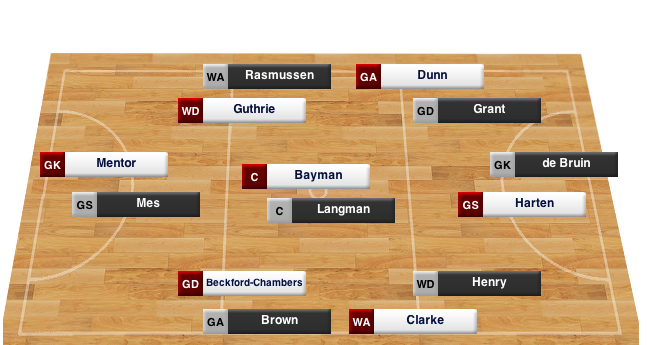 Kadeen Corbin replaced Dunn for the second quarter and she instantly combined with Harten to net. The latter making a lightning quick drive into the circle to receive a pass before off-loading an equally rapid feed into Corbin under the post. It was world class stuff from a world class attacker.

The tension on court was visible as both sides struggled to dominate play, although this aided England to keep their illustrious opponents at arms-length.

The rhythm of play was summed up by a passage of two and half minutes towards the end of the half which saw seven turnovers and no goals scored. England remained five clear, leading 22-17 heading into the interval. More changes were made at the start of Q3 with Ama Agbeze on at WD, Guthrie shuffled into C and Clarke back on at WA having been replaced by Corbin in that position midway through the previous quarter.

A strong start from the Silver Ferns saw them level the scores at 25-25 early in the third quarter. A time-out saw Mayes revert back to the original starting line-up and this sparked a recovery for the visitors. Once again England finished the quarter strongly with Mentor providing turnover ball, a last ditch Harten score saw the ladies in red extend the gap to seven and take a 34-27 advantage into the final quarter.

An early New Zealand miss was rebounded by Beckford-Chambers and with Harten converting the lead moved into double figures. A few errors started to creep into the England game with held ball being called on several occasions as the Silver Ferns pressure told and the movement became disjointed. With four minutes remaining the gap was down to four and Bayman called a time-out. Mayes called for calm but the momentum was with the hosts. Clarke was putting her body on the line but was called for contact in the attacking third. New Zealand flew through court and with a score off their own centre-pass following, they now trailed by just one. 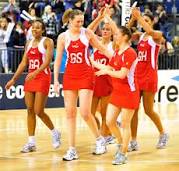 There was the feeling that demons from the Commonwealth Games could still be lingering as the Silver Ferns charge continued and the home support ratcheted up the noise levels. If the pressure was being felt in the stands, it wasn’t on court as the England team refused to sense the deja-vu. Dunn rolled in one from close to calm the nerves and after Mentor took another wonderful tip, England were in control.

Fittingly the game was made safe by the excellent Harten as she showed fabulous composure to net and take the gap to four with twenty seconds left on the clock, after more super work from the England defence. That was to be how the game finished as the England team embraced at the final whistle. Finishing off the game and collecting the win was hugely encouraging for England, as was securing victory over a top-two nation away from home.

The second and final match in this series is to be played on Friday morning.