St. George’s Park has created a culture of excellence and togetherness but has many challenges ahead, according to its managing director.

On 9 October 2012 the National Football Centre opened its doors to England’s stars, coaches and football enthusiasts alike – and began creating an elite football learning and training environment.  The opening ceremony was carried out by the Duke and Duchess of Cambridge. 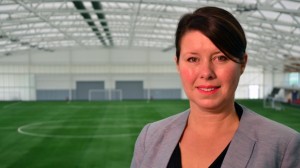 Source: Getty Images via the FA

“So you might have people who are literally here for a coffee at the hotel, we want people to feel close to what we’re doing here, to be close to English football when they are here.”

“When you bring everyone across the game together and you put education and football together in one venue, magic can happen.”

“You’ve got the top end of the game inspiring people just starting out on their journey.”

“There’s a cross fertilisation of ideas and people in the elite environment.”

Two years on from opening, the facilities have been used 95 times by England teams, helped educate 20,000 coaches across 85 courses and hosted over 600 grassroots clubs.

But it is the community culture created by the diversity of patrons in attendance that most pleases Harrington – and the unique learning environment that creates.

“When we had Barcelona here in August we had lots of other activity on that week.  One of the A Licence courses was also taking place. We were able to get one of the candidates along to watch a session of Barcelona.”

“That’s of huge benefit you can’t measure. It’s a hive effect where you’re bringing everyone together under one roof.”

As well as a coach education centre and home for England’s national teams, St. George’s Park is also home to The FA Licensed Coaches’ Club – now the largest coaching membership scheme in the world after it exceeded 31,000 members in May.

But despite its early success, Harrington is pragmatic and acknowledges that the project is a long-term one with plenty still to do – and gave an insight into what that will entail.

“We’re working with East Staffordshire Borough Council (ESBC) on looking at the next steps,” she added.

“This work even started two years ago before we even opened but the master planning element was something we needed to think about and say ‘this is what we’re building, but what do we think we’ll need’ in three-five years’ time.”

“Every business, if it’s going to be successful, needs to think about the future needs of its business.”

“There’s a huge amount that we started before we even opened here, but in the last two weeks we’ve had our ‘masterplan’ signed off by ESBC.”

“My next three to five years here will be driven by what needs there are for the performance people here to deliver success.  “My job is to do exactly that – deliver what they need to get success for the teams on the pitch.”