The Women’s Football Show on BBC3 Monday evening featured an article by Alastair Mcgowan of BBC Sport about the increase in anterior cruciate ligament injuries suffered by women this season.   Guests on the show, which was hosted by Tina Daheley, were Eni Aluko (England and Chelsea) and Ellen White (England and Notts County) who has been out of action all season because of just such an injury.

In fact this season three other players from Notts County have also suffered ACL injuries: Rachel Unitt, Sophie Bradley and Anna Green, as have: 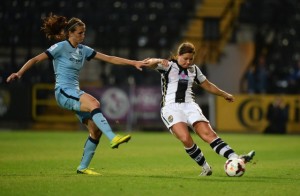 Research carried out by FIFA suggests that female footballers are between two and six times (a strange statistic) more likely to suffer this injury because of physiological differences, such as wider hips which affect the leg’s angle into the knee and under-developed muscles preventing the knee from turning in upon landing.

Surprisingly though the rate of injuries to the whole body is lower for women than for men.

It would seem logical then that extra work is done to strengthen these muscles to try and avoid as far as possible this type of injury and Steph Houghton (England captain and Manchester City player) says that “No-one deserves this type of injury.  Every club needs to invest in really good backroom staff to look after their female players” as her club (Manchester City) have done.

Concerns have also been raised about players who have gone from part-time to full-time footballers with the consequent increase in training, although it would seem to me that they should be at less risk than the players who work full time and can only play their football and train part-time.  Game scheduling is another area under scrutiny and some feel that there should be medical input when scheduling is done.  The FA insist they are working with the elite unit at St George’s Park in an attempt to establish an even spread of matches.

Most women’s teams currently rent their stadiums from lower league teams and the WSL moved to the summer three years ago to avoid fixture clashes with men’s teams and the risk of waterlogged pitches in winter.  They still have to fit their matches around other schedules and also have a break in the middle of the season so that pitches can seed.

The thorny topic of artificial turf is another area of potential concern, although research has shown that injuries are no more common than on grass a PFA study says that players feel less sure about playing on turf.  One thing is certain though, with two of the WSL having 3G pitches, the women players have to adapt to sometimes playing on artificial turf and sometimes on grass and the impact on the body must be different from each surface.  And, as players get older it must be more difficult to adapt and recovery must take longer.

When asked by host Tina Daheley how they feel about playing in the World Cup in Canada on artificial turf it became obvious that both Eni and Ellen just want to be fit and in the squad – their passion is for playing and whatever the surface they will be ready if selected.