England Women’s boss Mark Sampson has spoken of his honour at being invited to join Roy Hodgson to unveil a new pitch facility in Kent, reports The FA on their website.

The 31-year-old paired up with Hodgson at Charles Darwin School in Kent to see pupils enjoying a new state-of-the-art surface, funded by the Premier League and The FA Facilities Fund on Friday.

And with his team soon to be running out at Wembley Stadium for an historic game with Germany, Sampson believes it shows the progress of women’s football in England.

“It’s great to be invited,” said the former Bristol Academy chief. “The women’s team has come a long way and it shows just how far we’ve come that we’re at events like this with the senior manager.

“Roy’s very open to supporting us, he’s always wishing us the best and has let me know clearly that his door is always open if I ever want some advice.”

“We’ve had some discussions and it’s great that we’ve got someone supportive in that role because it’s a very important and pressurised role.”

As well as seeing some of the young female players at the school enjoying a training session on the new floodlit artificial pitch in Biggin Hill, Sampson also took questions from pupils keen to learn more about the England Women’s team. 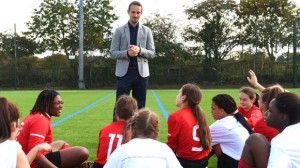 Source: Getty Images via The FA

And with the Germany game fast approaching, Sampson couldn’t hide his excitement at the prospect of following Hodgson onto the Wembley bench and seeing his side in action at the famous stadium.

“It’s a great way to finish the year and everyone is really excited to get the opportunity to play at Wembley and be the first international team to play there, against Germany,” he added.

“An England-Germany match is special at whichever time you play it so to have that game at Wembley in a World Cup year is a huge incentive for us to build on and try to play our best.  We’re really hopeful it will be the type of event that can help the women’s game kick-on to another level and we can get lots of people through the turnstiles.”

“Hopefully the team can perform and do their best to produce a performance that the supporters can be proud of and after that we can all come together as a women’s football community and celebrate what will be a fantastic day.”

Not only will it be a landmark occasion for the England Women’s squad, but it will also provide Sampson and his staff with an opportunity to prepare for next summer’s World Cup in Canada.

With Germany being one of the world’s top nations in the women’s game, it’s a chance for the head coach to see how his players fare after winning ten games out of ten in their qualifying campaign.

“Any chance we get to work with the players is fantastic, but to get the added bonus of playing a nation which is always there or thereabouts is fantastic too,” he explained.

“They’re two-time World Cup winners and European Champions, so they’re a very good team but we feel we can now compete and we want to go there, give a really good account of ourselves and see where we are at this moment in time.”

“Win or lose, that won’t dictate how we do in the World Cup but it will certainly help our preparations moving forward as to where we are as a team.”